A few days ago the Department of Justice (DOJ) made a much needed historical move in which they decided to end the use of Federal Private Prisons. According to Reuters, this move was made after calling them “less safe and a poor substitute for government-run facilities.” Immediately after notifying the public of this decision, two of the largest federally funded prison corporations (GEO & CCA) saw major losses in their stocks after some investors pulled thousands of shares aware from both giant corrections corps. 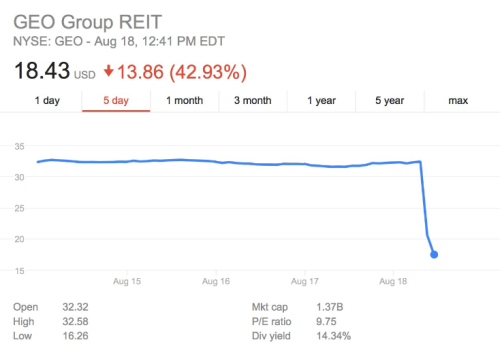 Since it’s inception, corporations such as the CCA have profited in earnings as much as $1.7Billion! And due to the lucrative business of locking up American citizens (U.S. is the #1 Mass incarcerated country in the world), federal privately owned prisons weren’t slowing down when building new facilities and correctional buildings. As a result these decisions made a clear statement that these facilities were solely being used for-profit rather than rehabilitating their inmates. In 2015, data showed that the U.S. made up 25% of the world prison population even though America only represents 5% of the global population. Out of that staggering statistic, African Americans were the #1 mass incarcerated race even though they only consist of 12% of America’s population. Likewise, the decision made by the Department of Justice was long overdue and a promising sign of hope to help end mass incarceration in the U.S.

GEO & CCA will both still operate on a federal level due to their contracts a US immigration facilities, a much booming business due to the influx of immigrants moving illegally to America to seek citizenship.Unfortunately, state regulated private prisons will very much still operate. GEO and CCA have contracting ties with respective states to house inmates for profit. Regardless, a step in the right direction, no matter how big or small, is a win for society. Therefore,  we look forward to seeing if state legislation follows suit within the next few years; wishful thinking…

For more information about this groundbreaking change click here & check out the video below!