For the first time since 2013, bitcoin is valued at over $1000. Contrary to more  traditional forms of currency like the U.S. dollar or the euro in Europe, (which are both issued and controlled by a central bank) bitcoin creation is decentralized. Encrypted digital coins are created by supercomputers and then traded online or exchanged for goods and services by a network of users. In 2016, bitcoin cryptocurrency outperformed all central-bank-issued counterparts with a 125% climb in value. 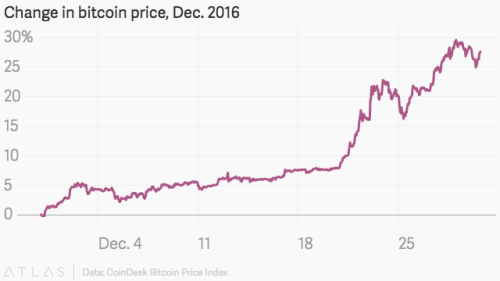 The digital currency has long been considered a risky investment by several economists due to a meek forecast for bitcoin adoption as well as speculation that bitcoin currency has been used by criminals for money laundering and financing terrorist operations. In 2017, analysts expect bitcoin valuation to ramp up another 165% to reach over a $2,000 valuation.

What do you think? Do you plan on investing in bitcoins in the near future?  Let us know below!