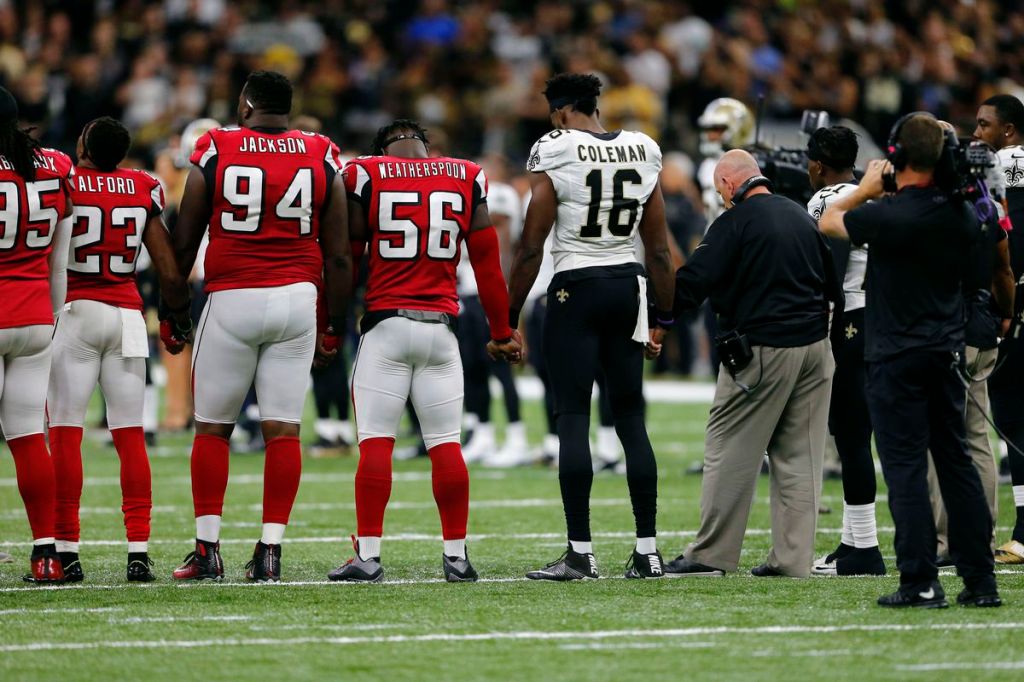 Unless you’ve been avoiding all forms of media, you’ve undoubtedly heard about Collin Kaepernick’s protest during which the QB takes a knee during the national anthem in an effort to bring attention to the mistreatment of minorities.  While the protest has gained both criticism and support across multiple sports at multiple levels, another form of public political speech has made its way into NFL games—the so called “displays of unity.”

The original display of unity came off the heels of a meeting between Kaepernick and Nate Boyer, a former Seahawks long-snapper and Green Beret. In a tweet posted by Boyer, the display of unity was meant to show a “sign of unification + respect for the Anthem + those that fight for our Freedom!” More recently, last Monday Night Football game between the Saints and Falcons, both teams agreed beforehand that all players would stand for the Star Spangled Banner and come together in a circle after its conclusion in order to bring attention to injustice, show unity, and of course, to show the now ever important respect for the national anthem.

While these displays of unity seem to be coming from a well-intentioned place, they unfortunately miss the mark in both message and effect. Kaepernick and others are protesting the oppression of minorities in America, which notably includes the way police kill people of color with impunity.  These protesters are asking for things like equality, accountability, police reform, true justice and due process.  What they are not asking for is unity. They are asking for change.  And no change in this country has ever stemmed from complete and total unity.

The only usefulness unity serves in protest is in unifying those that support your cause, bringing them under one movement so that the collective sum is greater than the individual parts. A successful movement changes some people’s minds along the way, but it never expects to convert everyone; it never expects to unify everybody. Unity in regards to protest is not meant to unify the protesters with those that are being protested. That has never been the point of protest. That will never be the point of protest. No matter how peaceful the protest, the goal of protest is always disruption in the hopes of effecting change.

So while Drew Brees may think “unity is probably the best way to make a change”, he needs to understand there has never been unity around the topics of race and racism.  He needs to understand that the changes Kaepernick and others seek will not be found in unity, and have never been found in unity; the changes have been found in protest, they have been found in disruption. And while I agree with Mark Ingrahm when he says, “Our nation needs to come together. Everybody needs to care for each other,” the harsh reality is that our nation has never in its history wholly come together on the injustice that Kaepernick is protesting.  Our nation has never, if you will, “unified” on the issues Kaepernick is protesting.  Locking arms before a football game isn’t going to change the mind of someone that believes Trayvon Martin, Eric Garner, and Terence Crutcher “got what they deserved.”

The displays of unity aren’t truly meant to unify the two opposing sides that surround Kaepernicks protests, because the displays aren’t truly meant to help bring attention and understanding to the injustice being protested.  Protests by nature cause discomfort, and the displays of unity only serve to undercut the protests by easing that discomfort and presenting the utopic non-solution of “unity”.  Whether they intend to or not, these displays only serve to help maintain the NFL’s image and keep an uncomfortable political discussion from creeping too much into the games. These displays merely uphold the status quo, and ensure that your time and money stay unified with the NFL’s product.