“Big day for Israel. Congratulations”, were the words tweeted by Trump before one of the biggest massacres in the Gaza Strip since 2014. Israel was said to have injured 2700 and killed 58 Palestinians by Israeli Army gun fire. 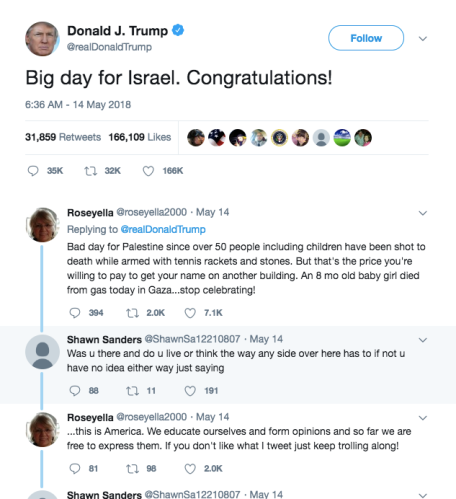 – “Throughout the day, Gaza protesters set tires ablaze, sending thick plumes of black smoke into the air, and hurled firebombs and stones toward Israeli troops across the border. The Israeli military, which has come under international criticism for using excessive force against unarmed protesters, said Hamas tried to carry out bombing and shooting attacks under the cover of the protests and released video of protesters ripping away parts of the barbed-wire border fence.

There was barely any mention of the Gaza violence at Monday’s lavish inauguration ceremony for the new embassy, an upgraded consular building located just 50 miles (80 kilometers) away. Israeli Prime Minister Benjamin Netanyahu and other top officials joined an American delegation of Trump administration officials and Republican and evangelical Christian supporters.

In a videotaped address, Trump said the embassy move, a key campaign promise, recognizes the “plain reality” that Jerusalem is Israel’s capital. Yet he added the United States “remains fully committed to facilitating a lasting peace agreement.” –  AP News

For more information on this story click here. RIP to all the victims of this gruesome violence.